v Bengal was divided into two parts in tenure of  Lord Curzon in 1905.

v Reasons for division of Bengal :- 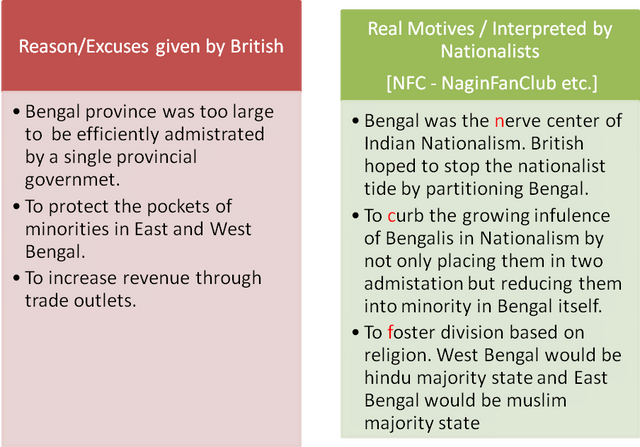 v Reaction of peoples on Division of Bengal ;-

§  The leaders of protest movement declared it the day of national mourning and it was observed by fasting.

§  The streets were filled with cries of ‘Vande Matram’ which became the theme song for national movement.

§  Rabindranath Tagore wrote the patrotic song ‘Amar Sonar Bangla’ (My Golden Bengal) which was sung by crowd parading in the streets.

§  People lost their faith in fairplay and justice of British government.

§  Accelerated nationalist movement by spreading it to the masses.

v Impact of  Swadeshi and Boycott

§  The Swadeshi and Boycott Movement was a boon for Indian industries. Many mills and factories came into existence. Even shops selling only Swadeshi goods came up, as the demands for Indian goods increased.

§  Automatically, there was a decline in the sale of British goods leading to a decline in imports and profits.

v Partition of Bengal was anulled in 1911

v The assertive nationalists wanted to extend the Swadeshi and Boycott to the rest of India and make it vehicle for a full fledged political mass struggle leading to Swaraj but the moderates did not approve it for the whole of India and wanted it to be continued only in Bengal. In 1907 in Surat there was a split in congress and assertived were expelled from congress.

v Assertive Nationalist were called so as they had different out look and advocated active resistance against the British Imperialism.

§  Growth of education and unemployement

§  Recognition of  True nature of British

o   Act of 1898 that made it a criminal offence to provoke people against British.

§  They though Indians to be self respecting , self-reliant and self-supporting and gained their confidence and self-esteem by reviving festivals like Shivaji festival.

§  Due to their efforts Parition of Bengal was annuled in 1911.

§  They exposed true nature of British.

§  They were able to add masses into mainstream national movement.